I’ve been piecing together my mobile shack since purchasing my current truck about a year ago. I have everything finally done (j/k – I know it’s never “done”), so here’s a quick post to share my temporarily complete install. This post is especially for the Ford guys out there wondering about installing roof antenna mounts on their truck equipped with a sun roof. Antenna placement will be somewhat limited with a sunroof, but it does not present any real complications during the install process nor does it prevent installing multiple antennas on the roof. Hopefully this post can answer some of the questions I had regarding radio installs in an F-150.

First – the truck: 2013 Ford F-150 Lariat 4×4, 3.5 EcoBoost. I purchased this truck about a year ago, and it’s running strong with over 100k miles on the clock. This truck is my daily driver to the office job, but it does truck stuff too! 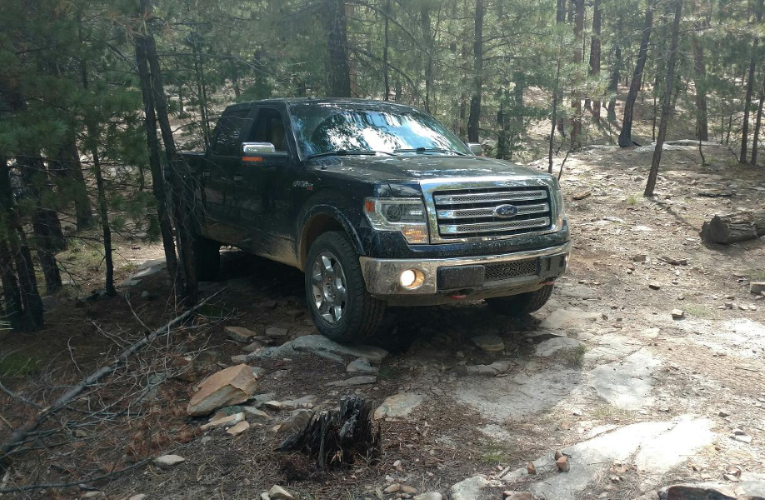 Next – the radios, from top to bottom:

Uniden BCD996P2 – I’m usually listening to Arizona DPS, local PDs, Phoenix & Mesa fire dispatch, and lots of other agencies/systems. Local news comms have been of interest lately too – they don’t keep hush hush on the radio about incidents.

Kenwood TK-8180 (UHF – GMRS) – I’m mainly active on GMRS while in my truck, and I’m usually on the Arizona GMRS Repeater Club’s 550 repeater. Daily traffic and weather nets for your commute – check us out!

Kenwood TM-281A (2m) – This radio is primarily for off-roading and back country comms. The 2m band is popular with Jeep/4×4 folks, and there is lots of activity out in the Arizona mountains or desert. Plenty of 2m repeaters on high peaks throughout the state with lots of people listening makes this an important communication tool when I’m camping well beyond cell phone service. Around town I’ll usually monitor 146.52 and chat occasionally. 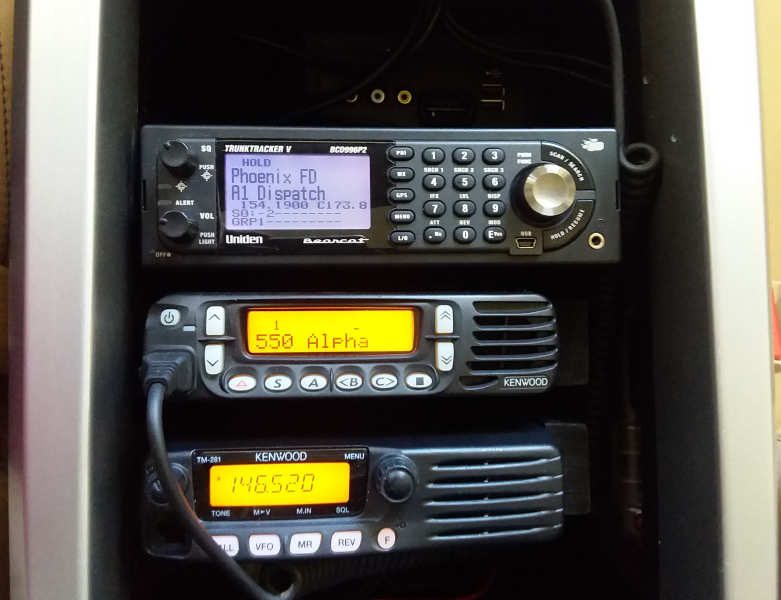 My F-150 is the Lariat trim, and Ford likes to use the center console shifters in these and higher trims. This significantly limits options when considering a radio install, and my only realistic option was to use the center console under the arm rest. This is far from ideal – it places the radios far out of the driver’s normal field of vision, and operating any controls requires taking your eyes way off the road. Ideally, I pull off the road and park to use any radio controls that aren’t just a single button press.

However, this installation configuration does offer one benefit that is important to my install – it keeps the radios out of sight. The theme of my F-150 install is to be a bit “stealth” or low key, and not stick out like a sore thumb or otherwise attract attention to myself as a result of the radios. When the center console arm rest is closed, no radios are visible from outside or inside the truck, and there is nothing to entice any potential thieves.

Let’s start from the beginning! To power the radios, I ran 10ga wire (with a 30A inline fuse) from the battery and chassis ground through the firewall and up through the center console. This gen F-150 has a rubber grommet on the driver’s side firewall with a nipple that can be cut off and wire fed through, making running the power from the battery and coax from the front fender mount antenna very easy. This pic I found on F150forum.com shows it better than the photo I took: 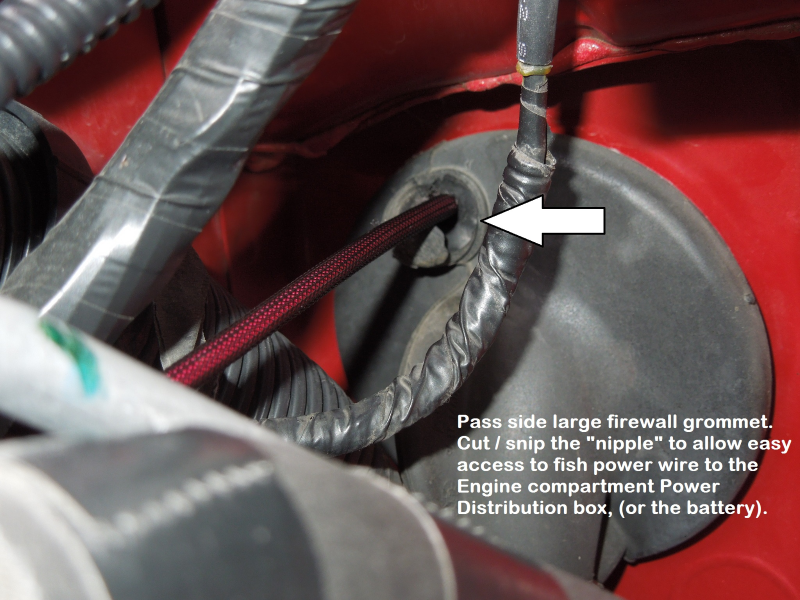 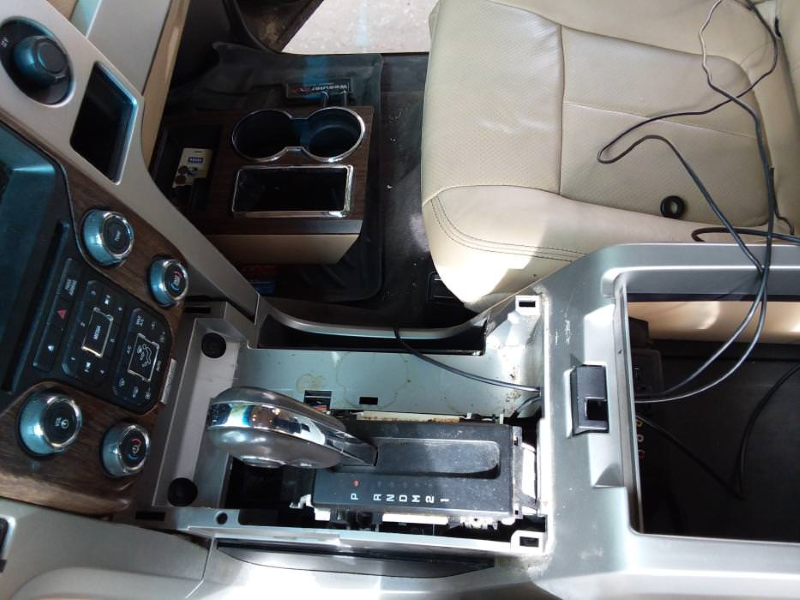 Power is run to a Blue Sea Systems fuse block and each radio has its own fused circuit: 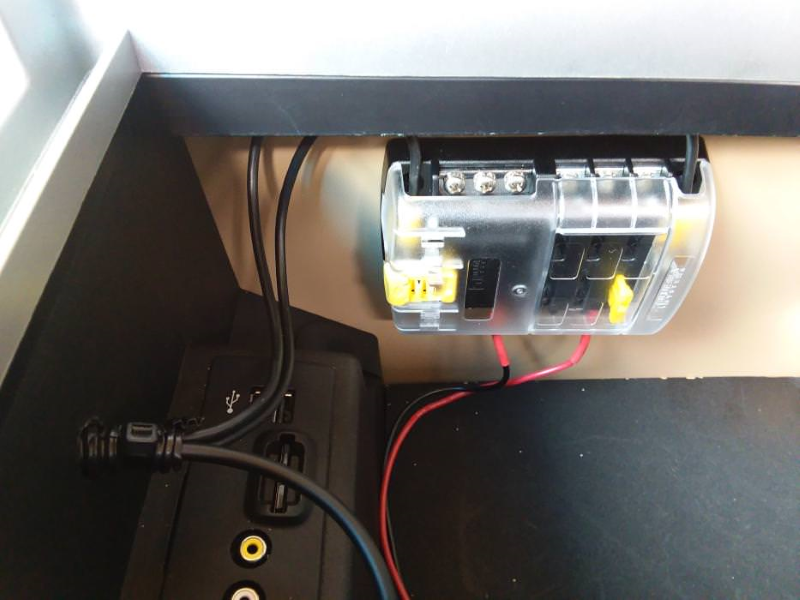 To secure the radios, I made a mounting rack from some 3/4″ plywood and some 1″ pine: 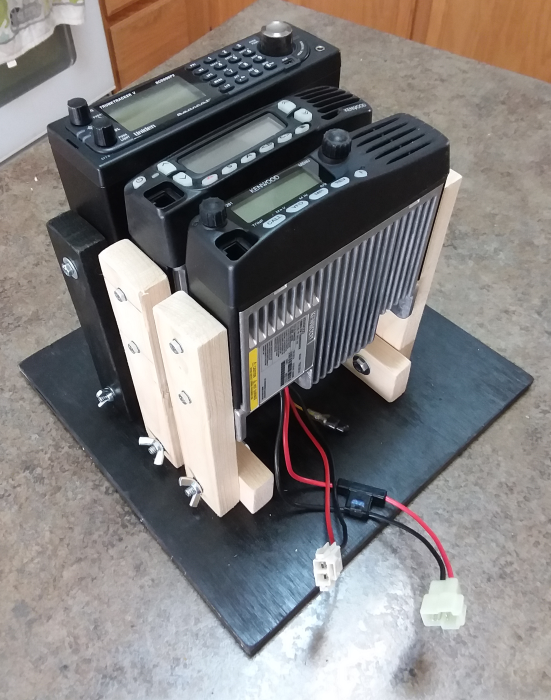 I attached the legs to each radio, then the legs are attached to the base with some bolts and wingnuts. I slide the base into the center console like this: 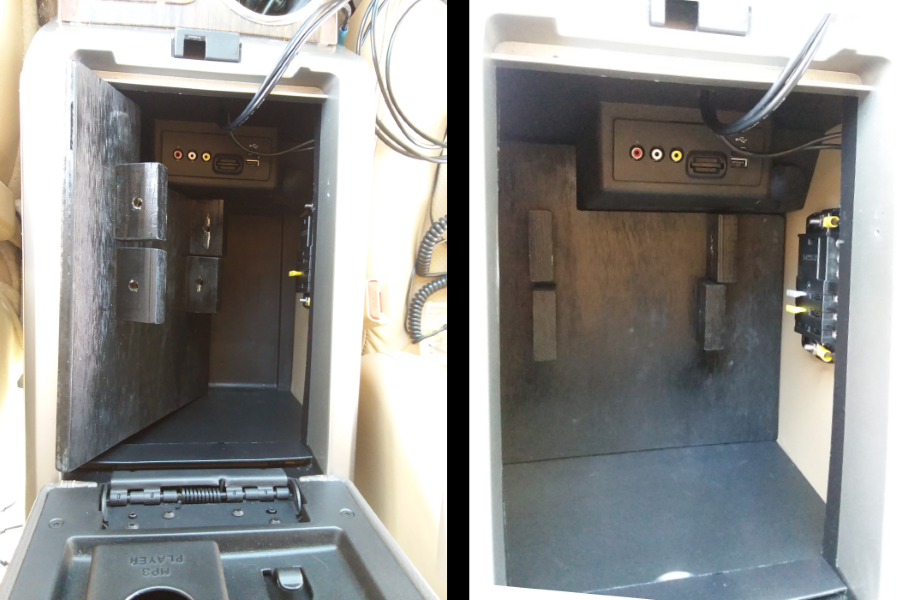 And then I’m able to drop the radios onto the base, then slide in the bolts and tighten the wingnuts. The radios are secure and the base fits snugly in the center console storage area. Here is the completed install showing the full length center console: 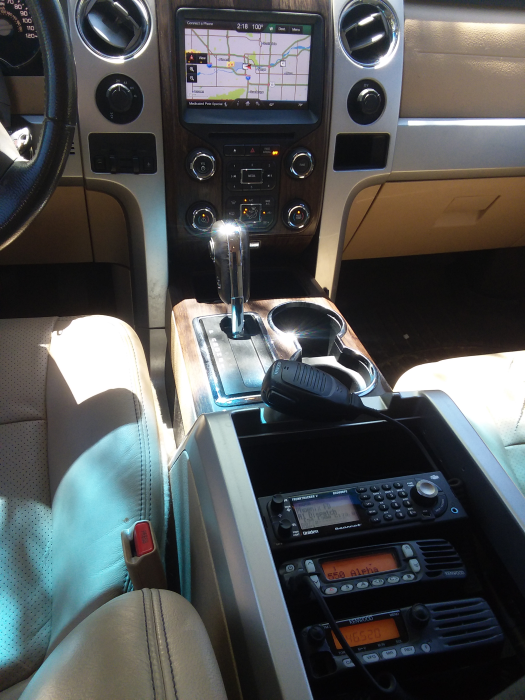 Operating the radios obviously requires keeping the arm rest up, which is another pretty major drawback: 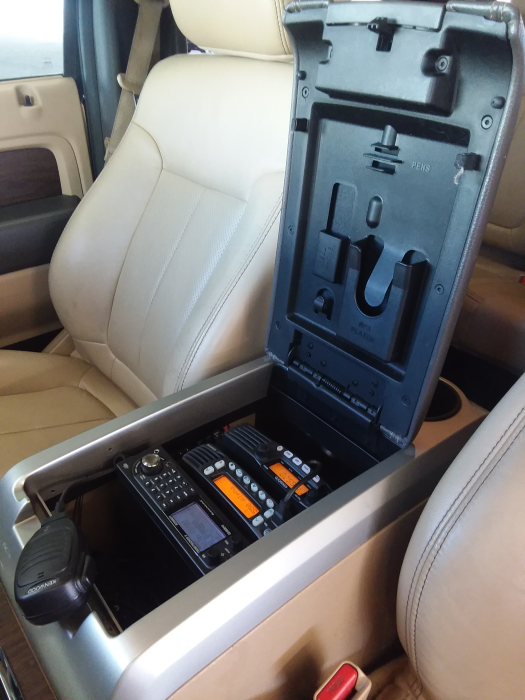 This is something I may address in the future. I would ideally like to have a custom console cover made which would be removable so it can be out of the way completely when I have the radios on.

Next up – the antennas. No install thread would be complete without some antenna pics, so here’s what my roof looks like now: 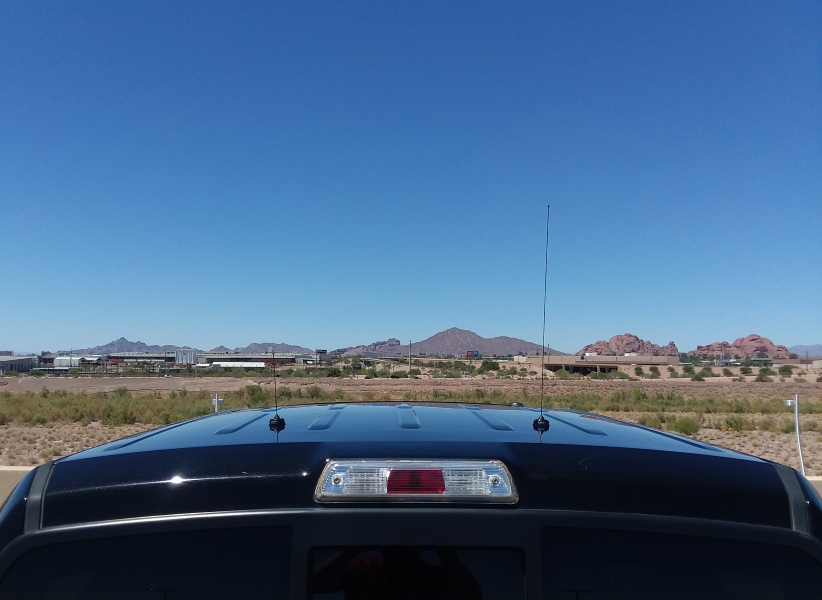 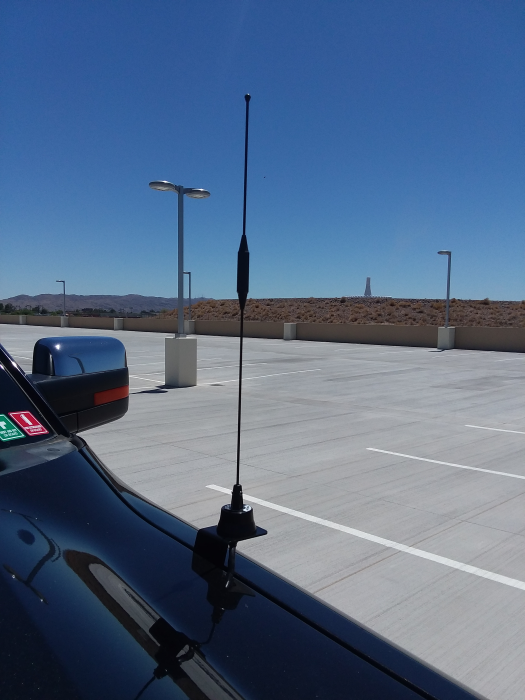 For the roof antennas, I used two Tram 1251 NMO mounts from The Antenna Farm: 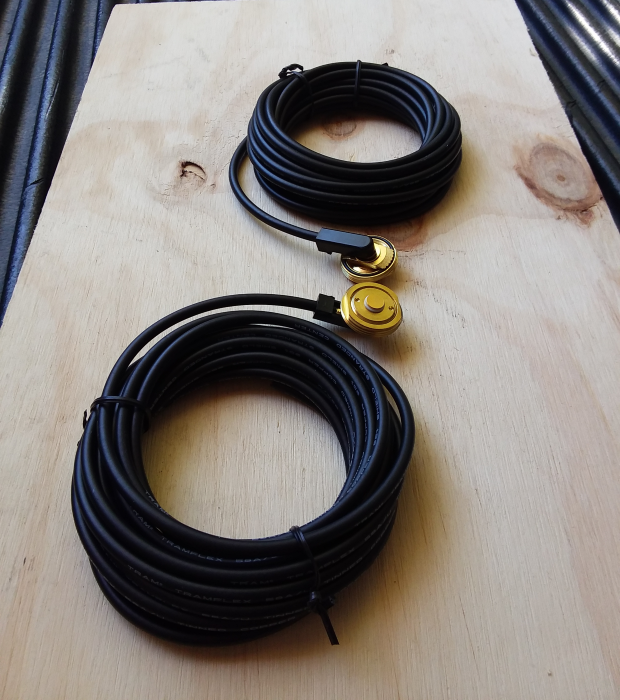 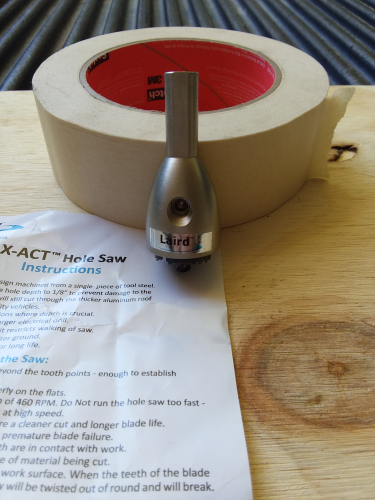 As I mentioned above, the sun roof on the truck significantly limits antenna placement. With the sun roof fully open, I was able to place both antennas 12″ from the rear of the roof to clear everything. Not ideal, but there is just about enough ground plane and it should work OK. Holes marked and masked – measure twice, cut once! 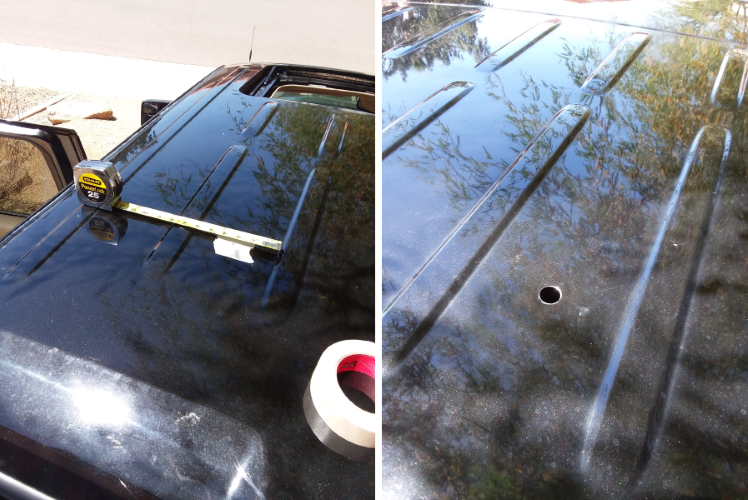 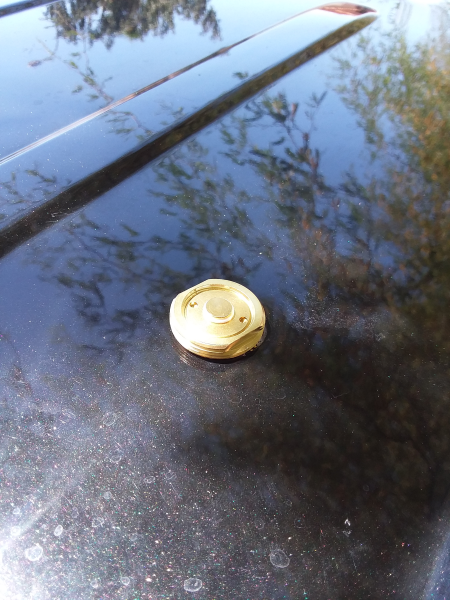 I put down a towel as a protective layer above the headliner when it was dropped down in order to catch all the mess from drilling and sanding. I used gorilla tape to keep the coax from flopping around off road, and ran both cables behind the rear passenger side airbag, down the rear pillar and under the door trim up to the center console. 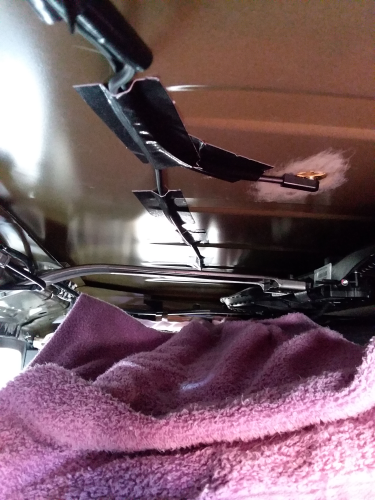 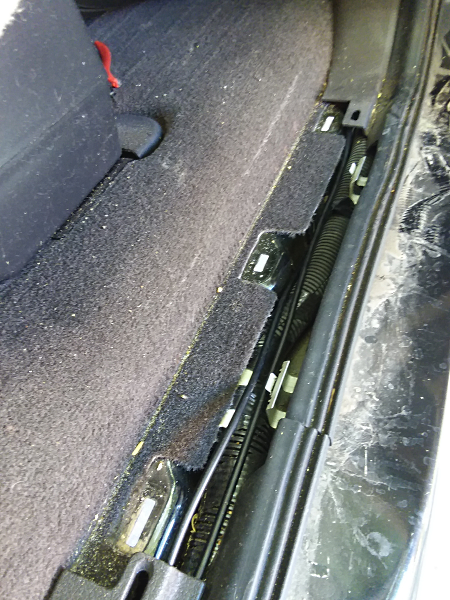 The fender antenna mount is a Larsen NMO L bracket fender mount for Fords, which I also purchased from The Antenna Farm. I sanded, primed, and painted it black to match the truck: 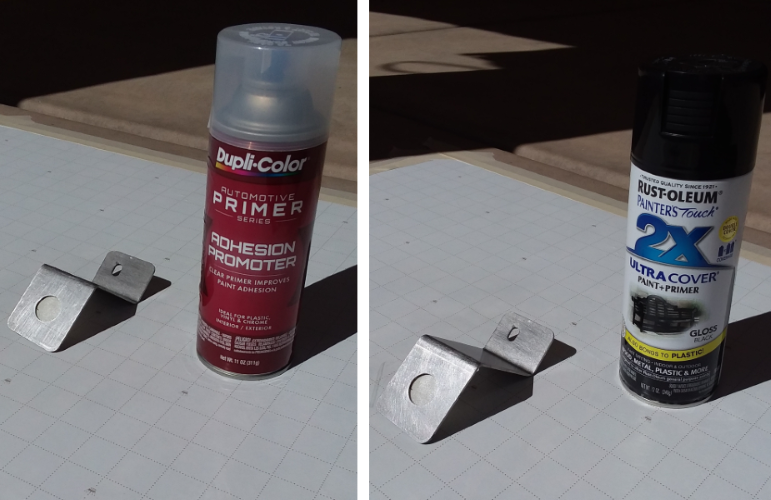 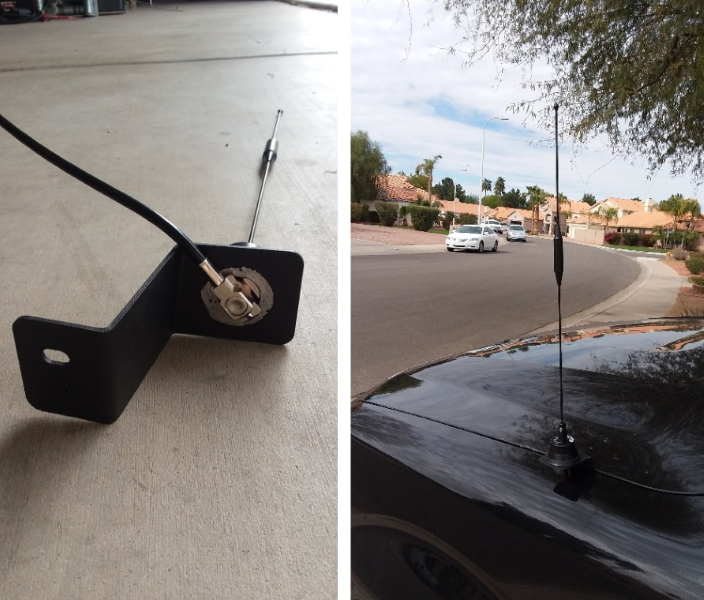 All antennas are black to keep with the low key look. They are nearly invisible at a distance, blending into the background or the black color of the truck itself. Here’s a few more shots of the truck and antennas: 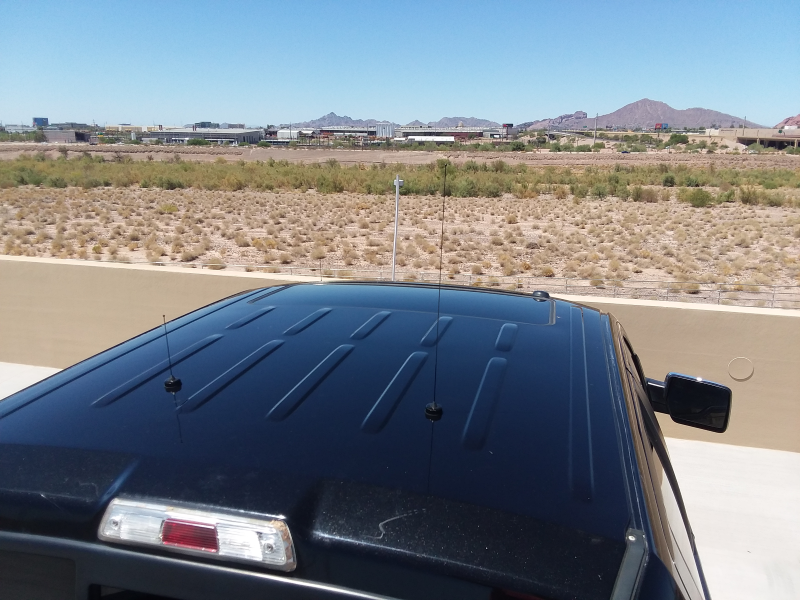 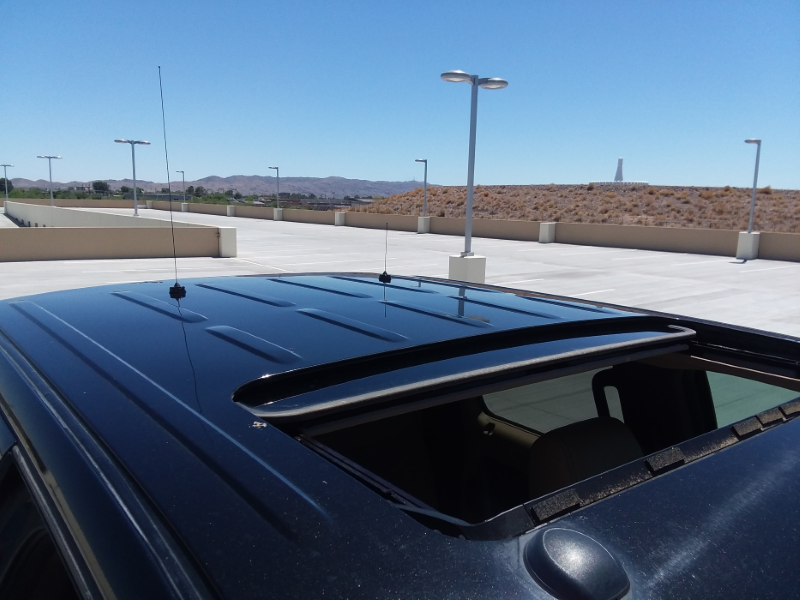 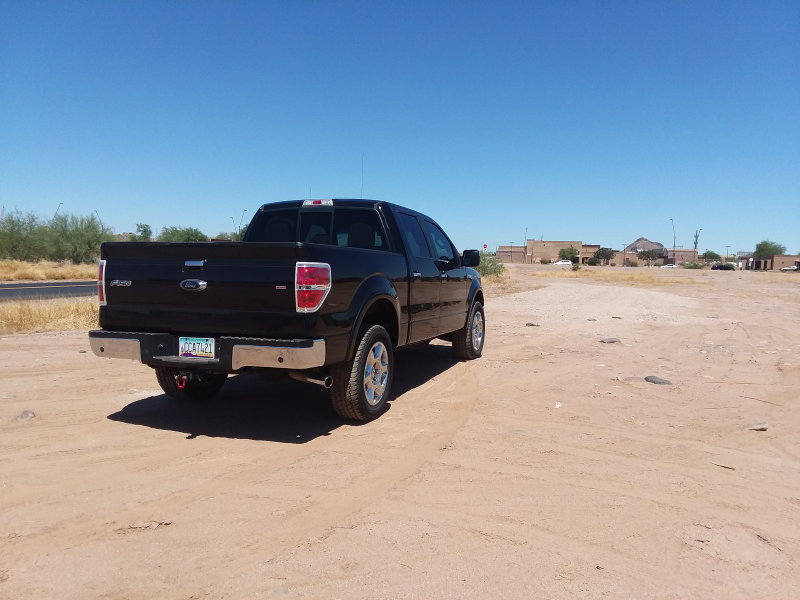 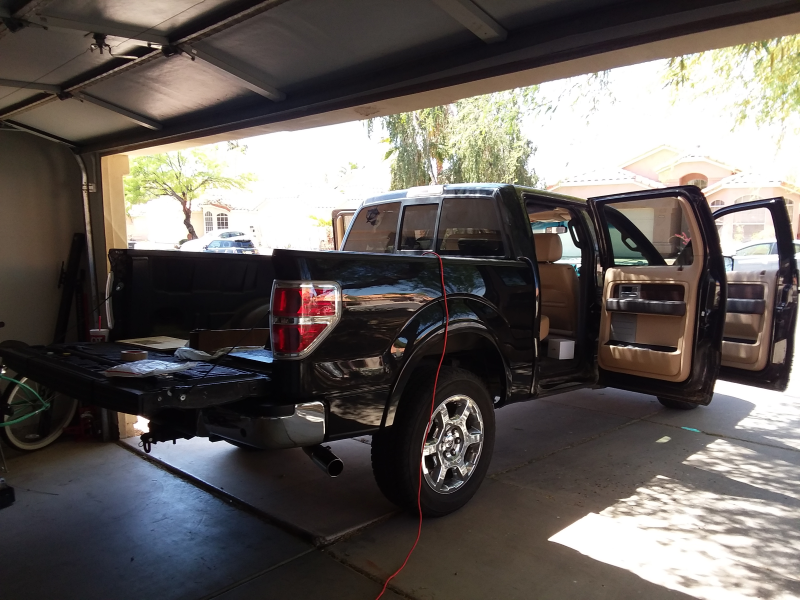 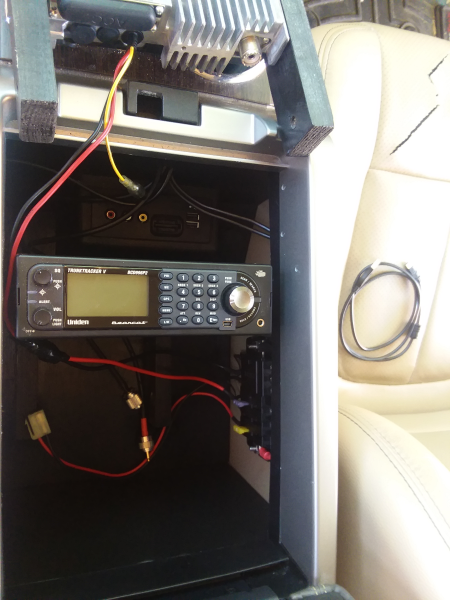 I have a few backup radios in the truck as well. I keep a Midland 75-822 CB radio hidden in the center console. CB is still pretty popular with 4×4 folks and it comes in handy from time to time on the dirt roads. I have it paired with a Wilson Lil Wil mag mount antenna I keep stashed under the rear seat. It’s actually a pretty decent CB setup and I can get out a few miles reliably, which is about as good as one can expect from a cheap CB. 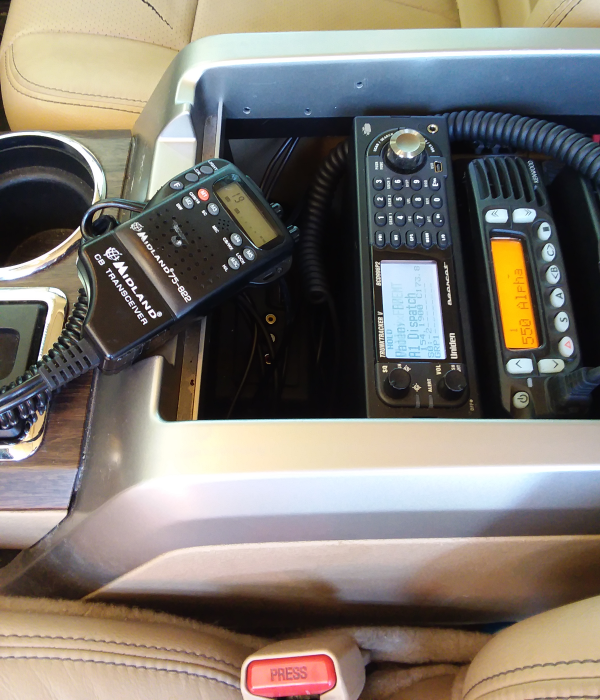 And I also keep a cheapo Baofeng UV-5R in the glove box just in case.  Another important piece of radio tech I consider part of my mobile shack is the factory Ford SYNC/SiriusXM receiver. Satellite radio operates in the 2.3 GHz section of the S band, and in addition to the music, sports, and news channels offered, up to date traffic and weather incident data is also available. SiriusXM also provides weather and navigation data for aircraft and marine subscribers as well. 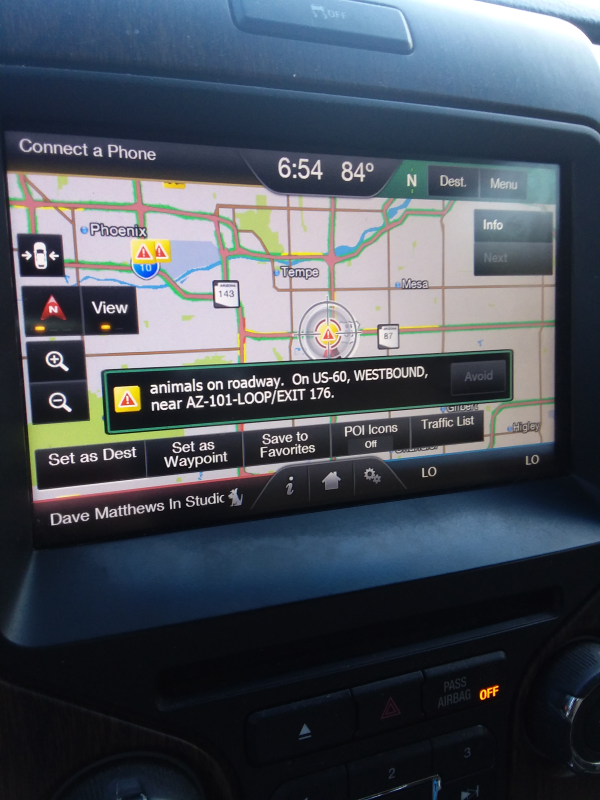 Here is the first iteration of the install shortly after buying the truck, just a single Motorola CDM1250 for GMRS: 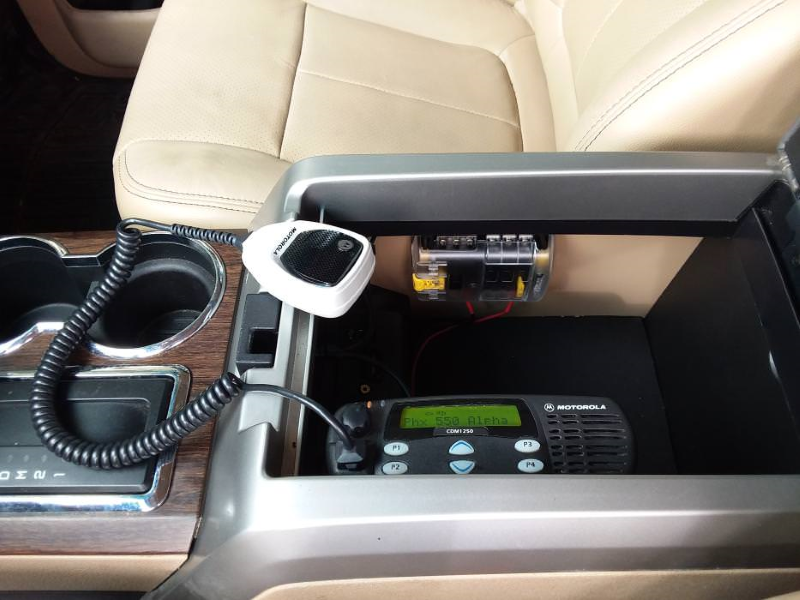 Email me, or visit me elsewhere on the interwebs: